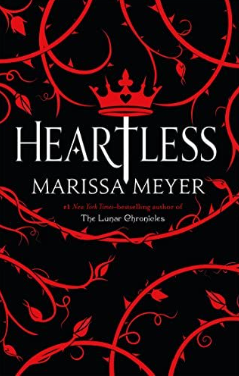 “OFF WITH HER HEAD!” rings throughout the world of Wonderland in Lewis Carroll’s Alice in Wonderland. Marissa Meyer’s Heartless transports readers into the world of Wonderland which is full of wacky and loony characters who all add to Alice’s outlandish adventure. Readers, experiencing Alice’s perspective, are originally unaware of the Queen of Hearts’ past. While at first, they only understand the iron fist of her current rule, Meyers takes readers into the heart and origin of the fearsome ruler throughout the plot.

Meyer begins her story with the protagonist, Catherine Pinkerton, a young teenage girl with a love for baking and daughter of Marquess and Marchioness Pinkerton, who reside in the Kingdom of Hearts in Wonderland. However, she puts her dreams on hold while her mother attempts to arrange her marriage to the king who has been interested in Catherine (and her baking skills) for a while. She does not reciprocate these feelings and uses the ball, the event of the expected a proposal, to escape with help from the Cheshire Cat. When she reaches the garden, she meets the King’s new Jester, Jest.  Following their meeting, Catherine gets to know the other looney characters everyone knows and loves and begins to experience life in a way she was never allowed to. Catherine Pinkerton’s destiny to become the ruthless and cold Queen of Hearts becomes uncertain.

Meyer delivers an origin story that is tragic from the start to finish and the stakes only grow and grow throughout. Catherine Pinkerton is head-strong, lovable and logical albeit unsure of her choices. Meyers also delivers characters and themes from other well-known literary worlds such as Jest’s sidekick, Raven, from Edgar Allan Poe’s The Raven or the Jabberwocky from Through the Looking Glass. From rhymes, foreshadowing, and the pacing of the story, Meyer’s novel captures audiences with how the Queen of Hearts ends up as the Queen of Hearts.

Meyer’s work has been an inspiration to others as well. A High Schooler in Utah took it upon herself and others and with Meyer’s books, they turned it into a musical with the permission of Meyers herself. The play, cast and story of its origin can be found on YouTube and Instagram. Marissa Meyer’s work does not stop there as her series The Lunar Chronicles made its way to the top of the New York Times Bestselling List with her stories being reimagined fairy tales in a futuristic world.